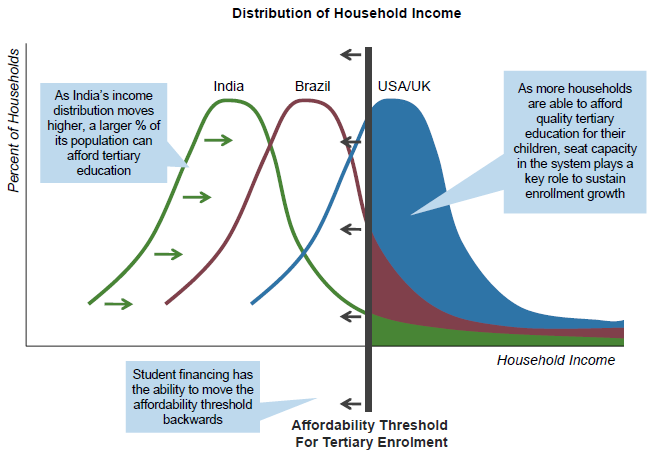 The Parthenon group, whose  mission is to be the strategic advisor of choice for CEOs and business leaders worldwide (Case Studies) came out with a report titled Financing Indian Higher Education during the EDGE2011 conference. So did Ernst & Young, with a report called 40 million by 2020: Preparing for a new paradigm in Indian Higher Education, building on its earlier report with FICCI a couple of years ago.

Another interesting report, which is as old as 2003 and created by All India Management Association, the Boston Consulting Group and Confederation of Indian Industry, is titled India’s New Opportunity – 2020. There must be many others.

It uses World Bank statistics to, however, show the reverse chain of logic. A higher GDP per capita is correlated with higher Gross Enrolment Ratios (steeper in countries like Brazil and India and flatter in the USA and UK).

Next, the report looks at the distribution of income and the affordability threshold.

The Parthenon report draws a single vertical marker for household income showing that currently tertiary education is affordable for just the long tail on the right – the highest income households. This is an incorrect perception. The Bell curve in the report also seems to be incongruous for India – a more reasonable picture is painted by McKinsey.

To preserve the growth story, student financing has the ability to move the affordability threshold backwards, is what the Parthenon report says.

Education on $10 to $60 a year (1995-96 levels) budgets is a vastly different problem. The Planning Commission report actually points out that households end up paying most of this budget for textbooks, uniforms and private coaching apart from fees; when these items are expected to be free and uniformly available at the right level of quality.

The Parthenon report compares costs of tertiary education between the USA and India and finds that it is more expensive in India for every income bracket. I paid a few hundred rupees for each year of college education and find this cost difference hard to believe from any perspective (even if were to consider reasonably expensive engineering undergraduate courses costing a 10,000 USD packet for 4 years of training).

The report describes the fact that broad financing options in the USA help get low income students access and paints a shocking picture of how advanced the USA is with multiples ranging from 5 to 45 times the number of students in higher education as compared to India. The subtext is, of course, that financing helped that miracle happen. The next slide states that the reason that many low income students cannot attend college is that they rely on precious family funds – if the family cannot afford it, they can’t go to college.

The solution, that the vast majority of India should take on private educational debt to move these budgets up, is a catastrophic suggestion, even if feasible at any level. But the Parthenon report goes ahead and does just that. It presents three options available to increase access to tertiary education in India.

Now, having made the argument – growth requires increased tertiary enrolment which requires households to spend money, which they do not have; which means they need to bump up their funds; and what better than to let the market in – its time to substantiate how the tertiary enrolment in the USA actually grew out of student financing reform between 1955-75 (is that true?) which led to capacity expansion in the next twenty years and is now seeing a capacity utilization phase with enrolments growth rate (private sector contributing to the tune of 7 times the growth of public sector education) rising in excess of capacity growth.

To be fair, the report talks about two concerns of student financing – that institutions have increased real tuition levels based on demand and what they can get, and, the issue that private schools want to make money & are less worried about student outcomes. The panacea they specify is the role of oversight to be played by the state.

Strange, bring in the market, get government to help it make money, let it make great money, then start rooting out the low hanging competition on quality grounds using state power?

And then comes the solution. There are significant problems today. We need to raise awareness, make the process simple, relax current terms (make institutions co-accountable as in the USA) and many other things we could do better and learn from the USA in handling loan processing – basically improve demand and supply factors to develop an efficient financing system.

Why am I being difficult? Obviously, we have to find funds to seed the system to meet the challenges, but how?

In a provocative post, titled US Student Debt Ticking Time Bomb?, from Sept 2010:

Take a moment. Look the student loan debt clock and read this If you thought the housing bubble was bad.

My second problem is that India is not the USA. We are different, in case nobody noticed it yet. We cannot compare with what works in the USA or UK. The analysis and solution are all about that comparison. What works elsewhere may not work here.

My third challenge is that the report is about the end justifying the means. Everything is backward, leading from the conclusion that financing is good because it really makes money for those who have it. And the argument is not put together with care, even if that is the belief. For example, it makes the assumption that we are the most efficient spenders of government money on education. It makes the assumption, the really bad one, that we know nothing of student debt problems in the US. And many more such assumptions.

My fourth challenge is the numbers. Our scale is far bigger than what the USA faces. USA has 83% Gross Enrolment Ratio in Higher Ed with 18 mn students. We have a GER of 12% and we are at 16 mn students already. A drop here is an ocean elsewhere. We can create monsters many times the size of the housing bubble in the US or create a benign superpower by making some fairly simple decisions now.

My biggest challenge, though, is that most people will look at this and say it is probably the right solution. If government can’t pay and the vast number of students are suddenly able to pay for education that is obviously too expensive for government to bear the cost of, then the only solution must be to fund it in another way. Or they will hide behind other excuses, saying teachers are so underpaid (and in great shortage) and the infrastructure is so bad.

Its time we stood up and tackled our problems the hard way – and there is no other way to do this that is right. We have enough smart people and enough money to work our way through these issues. And we have many friends in countries all across the world that are dealing with similar problems and would love to help and be helped in the process.

Next post: A look at the E&Y reports. Game changers for Indian education.